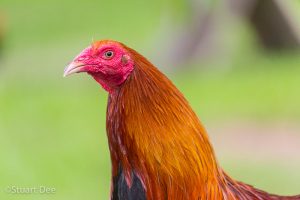 Origin Of The Sweaters

Nene Abello’s breeding program is centered around they Yellow-Legged family of chickens, today known as Sweaters.

Back in the 1960s these chickens were fought by Sweater McGuiness. They did so well that notable game breeders of the time, namely Harold Brown, Duke Hulsey and Ray Hoskins acquired this breed to use as brood fowl. Walter Kelso did the same with the aid of Cecil Davies.

Initially, Sweater McGuiness only bred and fought Green-Legged chickens but through his breeding program he was able to make his fowl yellow-legged. But to this day no one knows how he did it.

Nene Abello recounts how he developed his brood of prize-winning fighters:

During the late 1980s, Gene Brown and Carol Nesmith were fighting under Oak Grove and were dominating the major competitions around the US. Their fowl were half Sweater and half Ray Hoskins yellow-legged hatch. When the partnership fell apart I acquired both Sweater families, finding them more suitable for Philippine fighting. 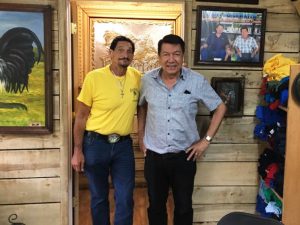 These sweaters were owned by Carol Nesmith derived from lines that came from Harold Brown. Mr. Brown preferred the green-legged side and eventually lost the yellow legged color.

Prior to this I was an associate and friend of Ray Alexander who had a superior of Round Head chickens. I bred these Round Heads with the Sweaters with unbelievable success.

Then realizing that we had to be stronger and longer lasting than the competition I bred a family of Hatch chickens containing some Harold Brown blood. This cross seemed to awaken superior genes which were otherwise dormant.

When my brother and my son were living in the Dallas, Fort Worth area I was a constant visitor of Ray Hoskins. I had acquired some of his Yellow-Legged blood and also put them together and I was getting closer to the original blood that Sweater McGuiness had won with back in the day.

With our breed of Sweater chickens we won in major competitions like the World Slasher International where we were champion in 1995 and 1998; Runner-Up in 1996, as well as the Iloilo Candelaria Derby (one of the most prestigious fights outside of Metro Manila) where we had 7 straight wins in 2002 and 2003.

Our prize-winning game fowls are available for sale throughout the Philippines and Malaysia with inquiries coming from Mexico, Africa and the Middle East.